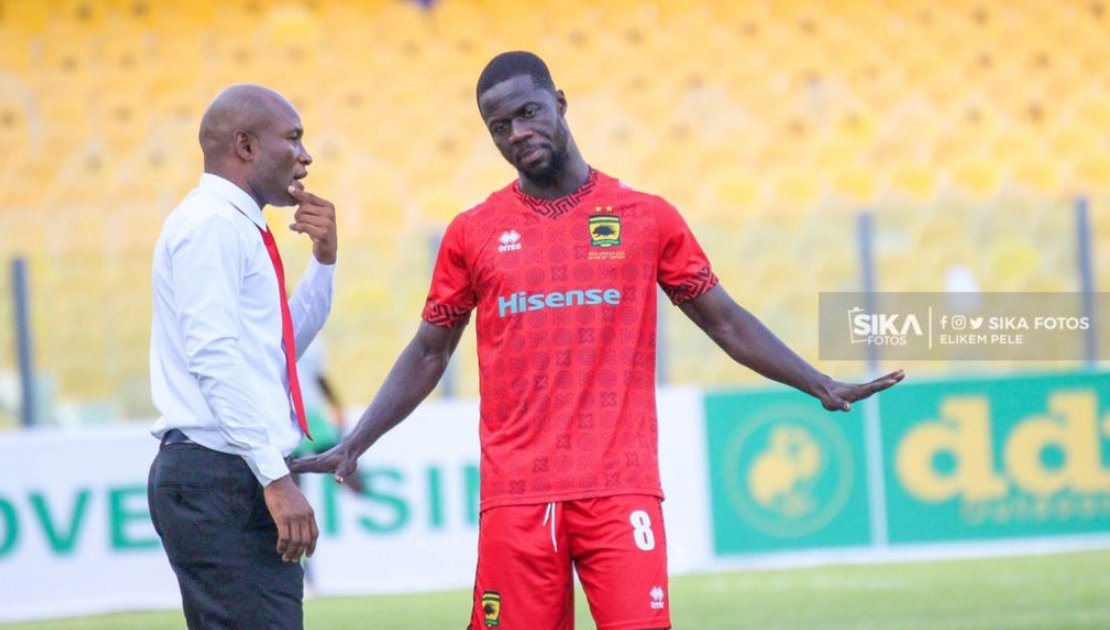 Coach Ogum and one of his players Richard Boadu in the Dreams game.

It’s way too early to draw any definitive conclusion on Asante Kotoko coach Prosper Nartey Ogum. It’s actually ill-timed if not hasty to say anything big about Coach Ogum. The man just started real work after steering what was a brief yet relatively fine pre-season, which took the Porcupines to Dubai, and where they not only sharpened their arsenals but additionally had good time to bond.

Coach Ogum therefore has so much ground to cover in terms of getting his team to perform, win matches and the hearts of Kotoko fans. It’s worthy of note, however that, Coach Ogum has had a good take off. He’s hit some positive notes and it’s necessary we acknowledge that before sight is lost of it.

I don’t hold this view because of Saturday’s dramatic 3-1 win over Dreams FC in our Ghana Premier League opener. Kotoko overcoming Dreams FC isn’t extraordinary except the sensational form this victory took – that’s, the Porcupines being 1-0 down with five minutes to full time but superbly equalising and scoring two more beautiful goals to silence Dreams by the 91st minute.

Thus, while it’s alright to applaud the win, I’m here to highlight the thoughtful, calculated, far-sighted steps Coach Ogum took when he was signed. Some commentators have said he isn’t a PhD holder for nothing. I agree with them. Ogum researches, thinks and analyses well before he moves. This was evident in his decision to fraternise with certain blocs and notable personalities in and around Kotoko when he was appointed. It was a clever move on his part.

He was under no obligation to seek audience with anyone. Yet, here was the coach, seeing wisdom in calling, meeting and actually visiting some Akopa figures, Circle leaders including former Kotoko employees. Ogum scored full marks there – courting support and literally seeking blessings.

You wouldn’t easily notice real footballing sense in Ogum’s visits and calls if you don’t pay attention. From a Kotoko and purely cultural perspective (considering the often labyrinth Kotoko politics), Ogum by that action, united forces that will stand behind him and not easily fight him in difficult times.

I dare add, that, Ogum’s courtesies may not necessarily save him from being sacked if the situation so demands but that show of respect earned him points off the field and a lot more baskets of points on the field will definitely suffice for a 25th league title.