But before Victorien Adebayor joins the exodus train, we need to talk about him. His performance merits the attention it is receiving. 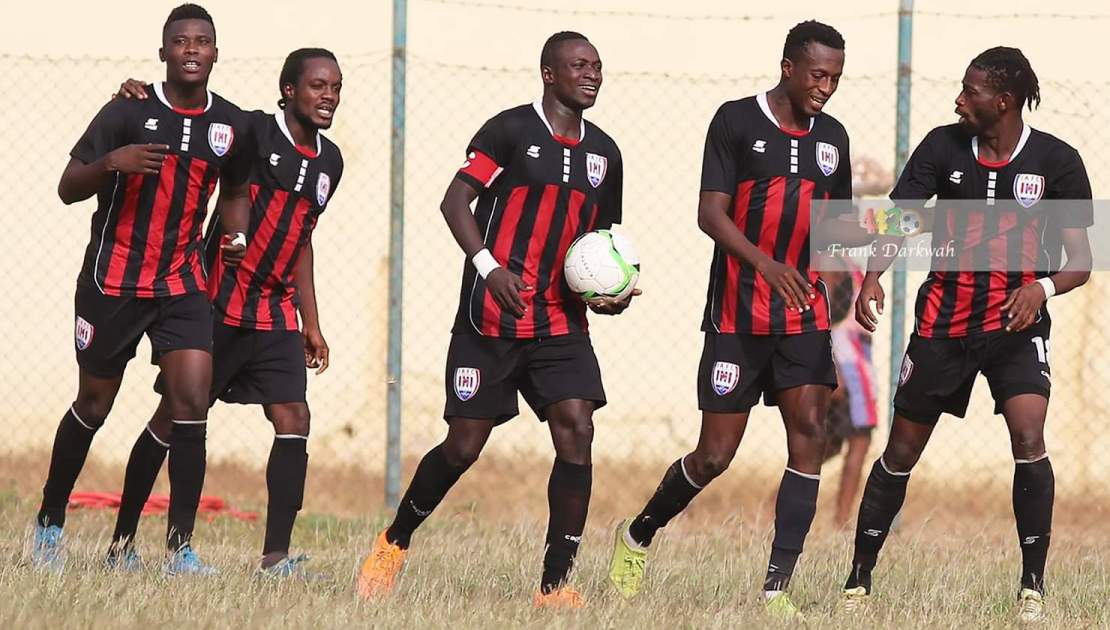 Victorien Adebayor (with the ball) with his teammates.

He is by all counts, the most exciting player in the 2019/20 Ghana Premier League (GPL) presently. He grabbed the headlines for good reasons after their match day ten away fixture at Berekum. Still wondering who is being talked about here? Well, he is Inter Allies' Victorien Adebayor, who was yet again on target, helping to reduce Berekum Chelsea to nothingness at the Golden City Park.

Adebayor did not only score his 10th goal of the season in Saturday's game, the Nigerien also played delightfully even to the admiration of devout Berekum Chelsea followers. His pace and dribbling prowess coupled with that flawless finish after nutmegging experienced centre back, Ahmed Adams, justifiably, has become one of the most shared GPL videos.

Adebayor's shine brings glory to the GPL. Goals matter in football and by scoring ten goals at this stage of the competition, all eyes are on Victorien Adebayor. You can predict with utmost certainty that; he would ship out soon to deprive us of the fun and joy in seeing him play in the GPL. We should however accept that, under the circumstances players in the GPL ply their trade, they would always leave for better experiences abroad to improve their lives.

But before Victorien Adebayor joins the exodus train, we need to talk about him. His performance merits the attention it is receiving. It is no exaggeration stressing the fact that, he is the GPL’s best player. Our league yearns for players like him – star performers who will give us something to cheer about every match day. All that will contribute to bringing back the love for domestic football.

Victorien Adebayor's 10th goal undoubtedly threw a challenge to Aduana Stars' Yahaya Mohammed, who also hit the ten-goal mark on Sunday despite his side’s humiliating 2-5 defeat away to Liberty Professionals at Dansoman, Accra. Yahaya Mohammed has loads of experience in the competition. The quality he brings not just to Aduana Stars but the entire competition is enormous and I can only hope that, Yahaya Mohammed, Victorien Adebayor and other fine players in the league will continue to glow to sustain the increasing enthusiasm.

The GPL craves for players of with outstanding performances since among other things, fans will always build their interest in the league around such players. It was no surprise therefore, that, when Asante Kotoko started fielding teenage sensation, Matthew Anim Cudjoe, the lad almost gained heroic status. Anim Cudjoe has loads of miles to cover to actually merit the accolades we hurriedly shower on him.

For now, the spotlight is rightfully on Victorien Adebayo and Yahaya Mohammed. They truly deserve every bit of the attention.