It was part of his 11-point strategy to improve the standard of refereeing in our football. 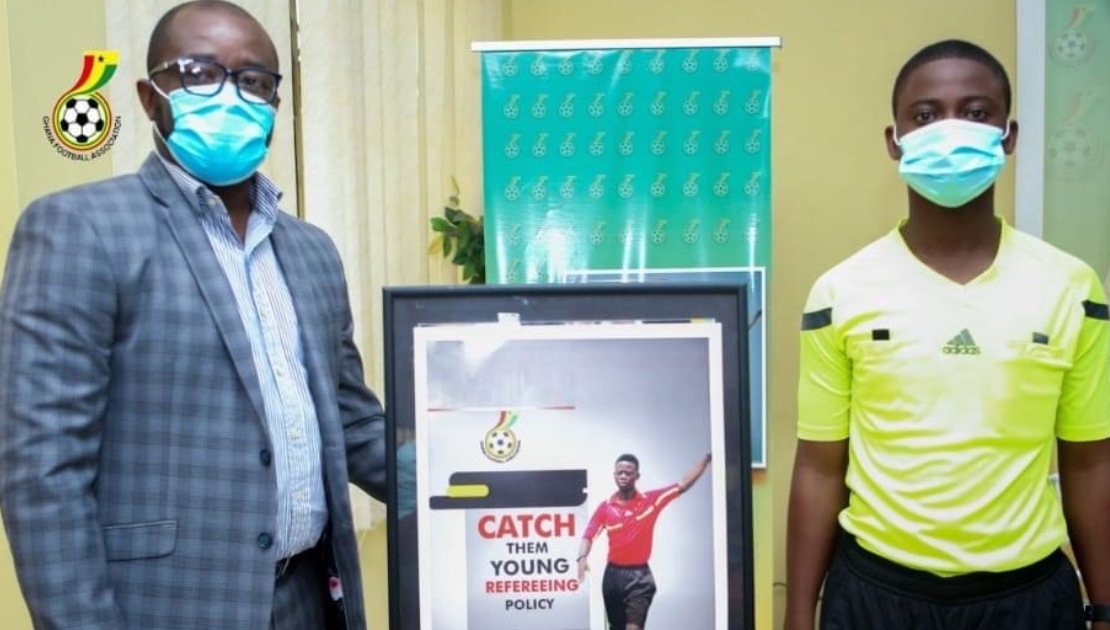 GFA President, Kurt Okraku (L) at the launch of the policy

It was one of the Game Changer Manifesto promises and at this stage, it has to be noted that, it was not a promise to merely woo voters. People vying for political offices like that of the President of the Ghana Football Association (GFA) have the tendency to share policies which warm the heart but are only tailored to win votes. They forget about all they promised after their victory. That is and will always be an irresponsible leadership practice which should not be tolerated or countenanced.

In October 2019, during the GFA Presidential election campaign, it may have been alright to say, it was a thing for the manifesto pages when Kurt Okraku said his administration would introduce an initiative to train young referees. But with the policy taking off now, such a remark is uninformed. Page 16 of the Game Changer Manifesto articulated the vision of Kurt Okraku on this policy.

It was part of Kurt's 11-point strategy to improve the standard of refereeing in Ghana. That, it was the first among the stated approaches to enhancing our refereeing quality, vindicates the position that, the Catch them Young Refereeing policy was dear to the heart of Kurt Okraku. “The policy will identify, nurture and train youngsters interested in refereeing to officiate juvenile matches within the localities” said the manifesto.

The amateur referee concept of is to “give opportunities to budding referees to officiate matches at the amateur level [after] intense training funded by the GFA” it added. If the talk about this policy has now become action, it is in order to pat the Kurt Okraku administration on their back. The education of referees is a vital cord in football development anywhere. Kurt Okraku and the GFA’s Referees’ Manager, Alex Kotey stressed this point at the launch of the policy today.

"The policy is aimed at unlocking the potential of young referees and build the future. The [policy is to also] support the education of referees at the grassroots [level]” said Alex Kotey. "If we want good referees, males and females, it is important to start very early. We want to comb the country and find young boys and girls with a passion for refereeing and add value to them” added Kurt Okraku.

As widely known, referees were heavily exposed in #12, the June 2018 corruption exposé on our football. In #12, many of our so-called elite referees shamelessly traded their FIFA badges for pittance – goat, rice, cooking oil and money. In #12, our referees actually affirmed how corrupt they were as some of them, under no duress, narrated tales of their cheating episodes nationwide. Trust in our referees has been since waned.

How long it takes to restore confidence in our referees may not matter compared to having credible referees; referees who will have the integrity, courage and professionalism to officiate and help the growth of our game. For a start, the Catch them Young Refereeing policy by the Kurt Okraku administration is a positive step toward that goal. It must be sustained as it could hand us excellent referees in future.