In addition, the system should also not jump to the defence of poorly performing referees like it was witnessed in the past. 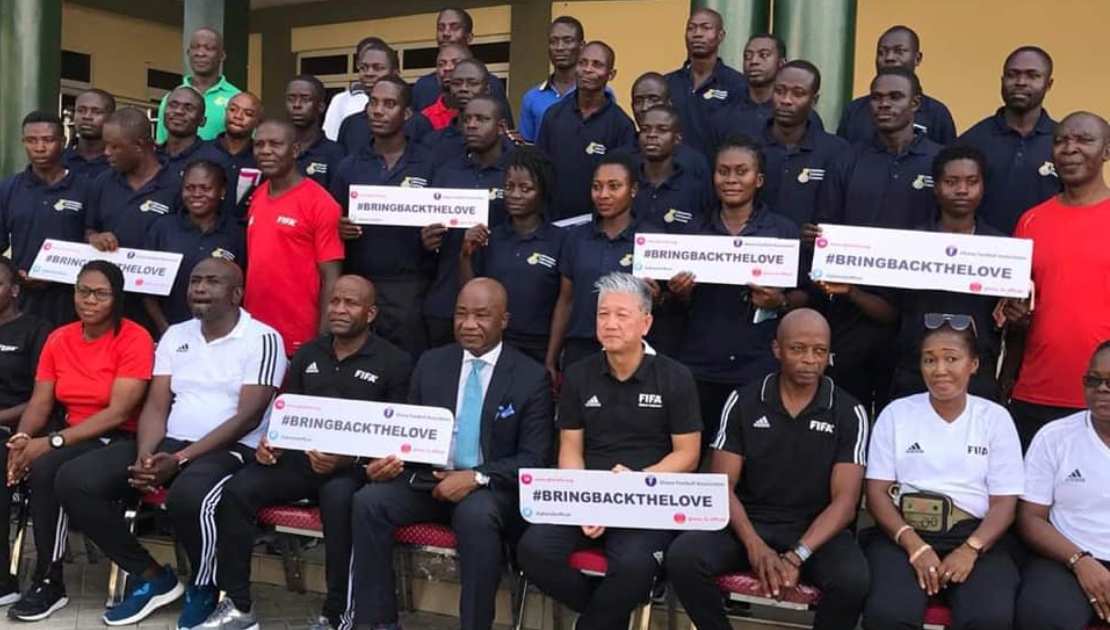 The referees in a group picture.

Fervent preparations are being made by various stakeholders of our domestic football as the date for the commencement of the Ghana Premier League and other league competitions gets closer. Clubs have not just been recruiting players. They are organising friendly matches and also strengthening their technical teams.

Some clubs have been sweating to meet demands by the Club Licensing body. I admire the resolve to set the best of standards and maintain those standards with hopes of sanitising what has been an almost careless, malfunctioning league football system which allowed anything to pass through its throat, eventually choking it with corrutption.

Referees have not been left out of the preparation though. A four-day integrity seminar involving 311 of them has started in Accra. Senior colleague and Vice Chairman of the Referees Committee, Michael Oti Adjei, commenting on a Facebook post by the Ghana Football Association (GFA) President, Kurt Okraku, on the referees’ seminar, wrote:

“It was a good day Kurt E. S. Okraku. Venue allows full concentration and Kim Lee Chong is one of the best to have done it on the continent. His opening admonishing asking the [referees] why they are never at major tournaments was brilliant. And Mark Addo spoke some uncomfortable truths. Hopefully it sets the scene for a good [four] days…”

The venue Oti Adjei talked about is the Pentecost Convention Centre. I do not know why the GFA chose that place but beyond its decency, the choice of venue for the seminar should tell the referees soemthing. Today’s Christianity maybe fraught with problems but the Pentecost Church is one entity whose integrity has been held in high esteem. That high esteem is what football fans expect the over 300 referees to have irrespective of their vulnerability as humans.

The initiative by the GFA is commendable. Capacity building is always importnat but then integrity – that is, the quality of being honest and having strong moral principles, does not come in a matter of days. Integrity is built overtime, from conscious, careful actions of what is ethically right, and in this case, playing by the rules of teh game even if it hurts your favourite team. No one should be under the illusion that an integrity seminar for referees make them whole.

It does not. The seminar is to empower if not refresh the referees’ knowledge of fundamental issues of being an arbiter and why it is imperative to operate within the ambit of rules – maintaining high level of honesty to ultimately grow our game. I expect the referees to come out better and discharge their duties professionally, even going to the extent of exposing people who dare corrupt them.

In addition, the system should also not jump to the defence of poorly performing referees like it was witnessed in the past. That only emboldens the bad referees. We must be ready to crack the whip, take bold decisions to clean every aspect of our game. We all have a role to play to make our football better, to bring back the love, and enjoy football the way others do. Let’s get down to a good work.