Running away from budget issues

The show of patriotism however shouldn’t stop or bar us from questioning the decisions of the MOYS which, predictably, often... 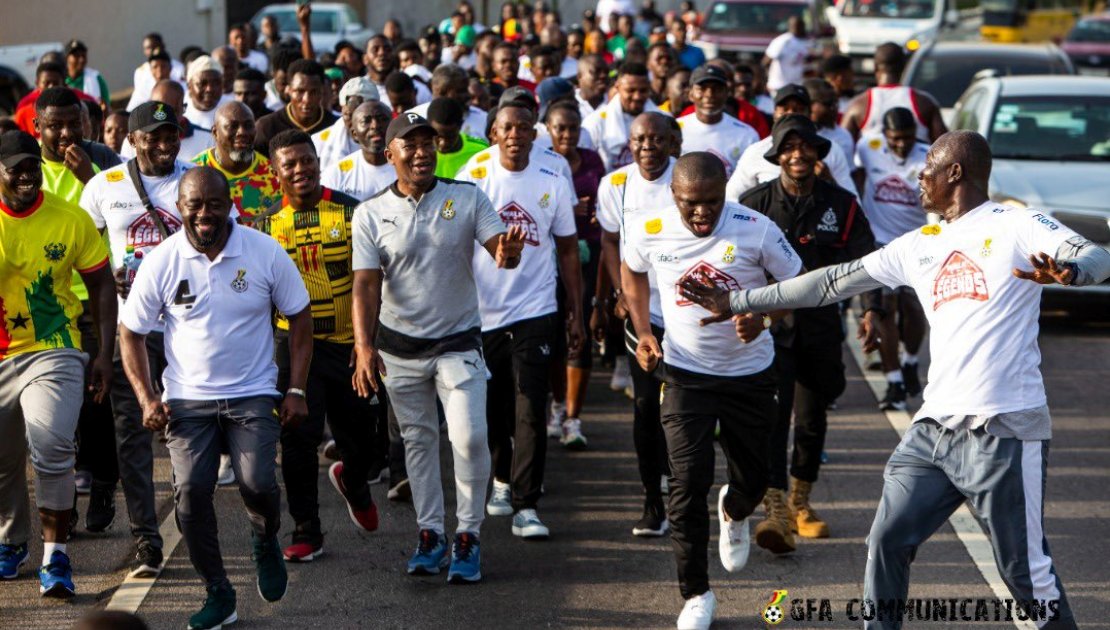 GFA President, Kurt Okraku; his Vice, Mark Addo and the Minister, Mustapha Ussif led the race at the Legends Walk.

Very typical of our Ministry of Youth and Sports (MOYS) they’ve yet again found lame excuses not to be open about financial matters of the Black Stars and as disappointing as that is, it should be no surprise since it fits well into how they’ve handled the senior national team in the last couple years with no proud, quantifiable returns.

He said this relative to the Black Stars budget for the FIFA World Cup Qatar 2022 during last Saturday’s Legends Walk. Some find nothing wrong with his revelation, which should be expected but the opaqueness the Black Stars World Cup budget is shrouded is disturbing to others. The fetishism the MOYS continues to create around budget issues of the Black Stars ahead of major competitions is problematic.

The same thing happened at the 2019 AFCON for example. The weak excuse was that media and public discussions on the budget would’ve distracted the team and that keeping it from public view served the so-called national interest. It didn’t. We exited that competition at the 1/16th stage and the then Minister of Youth and Sports, Hon. Isaac Asiamah, would later go to Parliament with an expenditure, not a budget.

His rather poor, inexplicable rendition of huge figures expended on the team with a never-fulfilled promise of returning with the breakdown, exposed the unconscionable financial waste and mismanagement of the team. Fears are that the same thing is bound to happen this time too though under a new Minister.

Managers of the Black Stars don’t seem to have the confidence to face public scrutiny on money matters. Claims that it would be a nuisance to the current team if the budget is publicised in these hard economic times are untenable. What’s true is, the MOYS and the Ghana Football Association (GFA) know that the public has little or no confidence in their management of the Black Stars relative to money.

Instead of working well with transparency to gain the lost public trust, they continue to distant themselves from the critical matters that would engender public faith in their handling of the senior national team. The MOYS and the GFA aren’t interested in making financial disclosures as though the Black Stars aren’t funded with our taxes.

Ghanaians have constantly been taken for granted in this regard. What’s there to hide? Why can’t they be open about things as basic as a budget for a national team preparing for a World Cup? Decision-making of these managers have been suspect and often not in tandem with public expectation. Perhaps, we shouldn’t say too much.

Wasn’t it the same MOYS and GFA who authorised and supervised a supposed acclimatisation camping for the Black Stars in Qatar in December 2021 well before qualification for the competition was secured? How many members, from coaches to players of the team that purportedly acclimatised in Qatar then are still part of the Qatar 2022 World Cup-bound team? What was the use of that 2021 camp in Qatar when sadly it heralded Ghana’s worse AFCON outing in history?

We’re encouraged to be positive and patriotic but that shouldn’t stop us from questioning the decisions of the MOYS which, predictably, often lead to financial waste and which in addition harm the already waned confidence in them particularly. The World Cup budget can be hidden for whatever reason. That only reinforces the public’s verdict: It’s one of little or no trust. It neither speaks well of the father MOYS nor its step child the GFA. That should be a matter of concern to both.